Cole Hamels came through with a solid 8 innings at Marlins Park '15 where the Chicago South Siders beat the Ragonk Force 3 to 1.

Chicago had the winning rally in the top of the 9th inning with 2 runs utilizing 4 base hits. After an out was recorded, Kris Bryant started the rally when he delivered a one-base hit. Nelson Cruz was next and he doubled. Robinson Cano then laced a base-hit which scored a run. Xander Bogaerts followed and he hit a deep fly scoring the final run of the inning. Ragonk went down quietly in the bottom of the 9th.

The win was credited to Hamels(12-4) who went 8 innings allowing 1 run. Kenley Jansen recorded his 11th save. Zack Greinke(9-5) was the losing pitcher. He allowed just 2 runs and 4 hits in 8 and 1/3 innings. 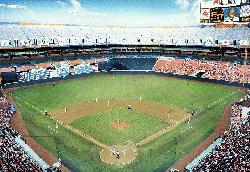