26,164 fans watched an exciting game at Petco Park '15. The No Cain No Gain topped the Chicago South Siders by the slimmest of margins, 2 to 1.

The score was knotted at 1 after nine innings. No Cain ended up winning it in the 10th inning. After two were out Colby Rasmus drew a walk. Francisco Lindor was next to the plate and he doubled making No Cain the winners and sending the 26,164 fans home happy. Despite losing, Chicago out-hit No Cain 11 to 3.

The victory was credited to Logan Verrett(7-6) who went 1 inning, allowing no runs. Franklin Morales(1-2) was the loser in relief. He gave up 1 run and 1 hit in 2/3 of an inning. 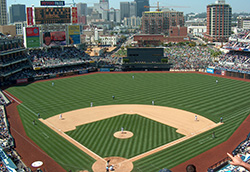 No Cain No Gain