Seth Smith went deep and had 2 RBI as the Ragonk Force defeated the Bottom Feeders 7 to 4 at Coors Field '15.

In the bottom of the 3rd inning Ragonk scored 3 runs with the help of 3 hits. Didi Gregorius kicked off the action when he banged out a single. One out later, Paul Goldschmidt got his chance to keep things going, but he went down on strikes. Yoenis Cespedes then lifted one out of the park for a two run home run (his 30th of the season). Smith was up next and he hit a bases-empty home run (his 6th of the season). Ragonk rapped out 13 hits for the afternoon. 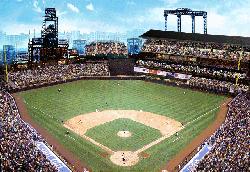