Josh Gibson enjoyed a big day at the plate. He tripled in the 5th inning, laced a one-base hit in the 6th inning and belted a three-run homer (his 1st of the season) in the 8th inning. Eastern Wallach made it exciting in the 9th, but they were unable to push the needed runs across.

Johnson(1-1) got the victory, allowing 4 runs for the game. Dennis Bennett(0-1) ended up with the loss in relief. Kumar was in a talkative mood in the clubhouse, 'Great game! If only we could win all of the close ones - wouldn't that be nice! Since that's not going to happen, I think I'll savor this one for a little while.' 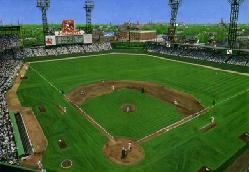