In a close game it was the Brooklyn Dodgers 5, the Salt City Diamond Dogs 2 3 at Yankee Stadium '27.

Brooklyn took the lead for good in the top of the 6th inning scoring 2 runs on 2 hits. Bobby Avila kicked off the action when he doubled. Two outs later Albert Belle came up and he cleared the fences for a two-run home run (his 28th of the season). Both teams ended up with 8 hits on the afternoon.

The victory was credited to Walter Johnson(11-4) who went 8 innings, allowing 3 runs. Mellie Wolfgang recorded his 9th save. Scott Sanderson(4-8) was tagged with the loss. 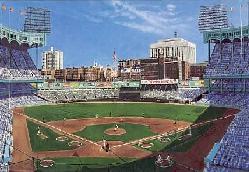