Ben Gamel lofted one into the 'cheap seats' and had 3 RBI at Kauffman Stadium '17 as the Wilderness Players Champs beat the Culture War by the count of 7 to 1.

Wilderness jumped on top of Culture in the top of the 5th inning with 2 runs. Travis D'Arnaud opened up the inning nicely when he reached on an error. Sean Rodriguez followed and he bombed a two-run dinger (his 5th of the season). Culture was out-hit by Wilderness, 10 hits to 7.

Andrew Albers(7-13) allowed no runs in 5 innings, and picked up the victory. Albers was helped out by Pat Neshek who recorded his 15th save. Yu Darvish(7-12) ended up with the loss. 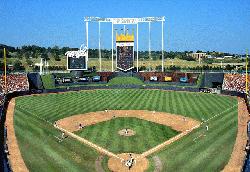