Tommy Davis had 4 hits as the Rapid City Racers won in dramatic fashion over the BS2 Brookfield Blue Whales by a score of 4 to 3 at Dunn Field '20.

In the top of the 2nd inning Rapid City went on top for good when they scored 2 runs on 3 hits. The critical plate appearance was by Pie Traynor, who silenced the stadium when he bombed a two-run dinger (his 12th of the season). Both teams finished the game with 8 hits.

Turk Farrell(12-9) picked up the victory, allowing 1 run in 8 innings. Dick Radatz earned the save, his 24th. Joe Nuxhall(11-6) was tagged with the loss. He pitched 7 innings giving up 6 hits and no walks. 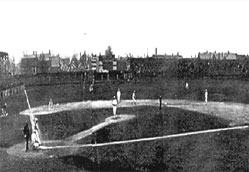