Halles took the lead for good in the top of the 5th inning plating a single run. Spider Creek threatened in the 9th but Halles was able to put down the rally.

The victory was credited to Tommy John(2-0) who went 6 innings, allowing 1 run. Luis Arroyo was credited with his 2nd save. Don Sutton(0-3) was the losing pitcher. He served up 3 gopher balls in 7 innings. 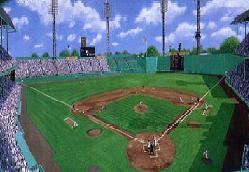