Cecil Fielder smashed 2 homeruns and Three Finger Brown carried a no-hitter into the 7th inning as the Skandia Bobcats defeated the Rocky Mtn High in 10 innings 8 to 7 at Baker Bowl '32.

Both teams were tied at 7 runs apiece after nine innings. Skandia ended up winning it in the 10th inning. After an out was recorded, Roy Campanella smashed a bases-empty 'big-fly' (his 10th of the season). Skandia had a total of 10 hits for the game.

The win went to Dale Murray(2-0) who allowed no runs in 1 and 1/3 innings. The right-handed Brown lost his chance for a no-hitter when Lou Gehrig homered with nobody out in the 7th inning. J.J. Putz was credited with his 10th save. Phil Regan(2-1) suffered the loss in relief. 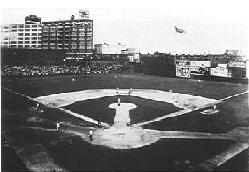