Mark McGwire ripped 2 homeruns and Barney Pelty allowed Nyc to rest his bullpen, tossing a complete game at Comiskey Park '55 where the Nyc Nyc beat the Pittsburgh Feds 137 6 to 2.

Nyc had 3 runs cross the plate in the 5th inning. McGwire started the scoring when he cracked a solo homerun. After an out was recorded, Luis Gonzalez came to the plate and reached on an error. Albert Belle then reached on an error. After another out, A balk was stepped up to the plate and he called plating another run. Cal Ripken stepped into the box and slapped a one-base hit scoring the final run of the inning. Nyc had 10 hits for the afternoon.

Pelty(3-8) was the winner allowing 2 runs for the game. Jose Fernandez(4-7) absorbed the loss. He was touched for 3 homeruns in his 8 innings of work. 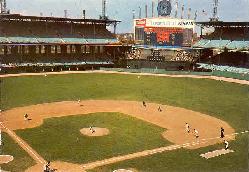