Carlton Fisk had 2 base hits as the Oregon Barnstormers 4 won a dandy at Dodger Stadium '78 over the Buzai Hu Too, 4 to 3.

The game was decided in the bottom of the 9th inning. After an out was recorded, Al Simmons stroked a base-hit, and an error was also committed. Earl Averill stepped up to the plate and he was walked intentionally. Fisk then lined a one-base hit resulting in a mighty exciting win for Oregon and the 27,336 home town fans in attendance. Oregon had a total of 9 hits for the game.

The win was credited to Lefty Grove(1-1) who went 2 and 2/3 innings allowing no runs. Ken Sanders(0-6) was tagged with the loss in relief. 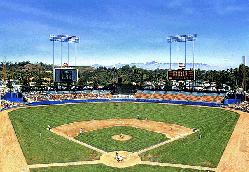