Catcher Gabby Hartnett slammed a homerun and had 2 RBI as the Buzai Hu Too defeated the Adamantine Hegari by a score of 5 to 3 at Polo Grounds '41.

Buzai jumped out to the early lead in the first inning plating a single run. Adamantine had a chance to come back in the 9th but they came up short.

The win went to Stan Coveleski(5-10) who allowed 2 runs in 7 innings. Ken Sanders was credited with his 18th save. Dazzy Vance(9-13) was the losing pitcher. He served up 3 homeruns in his 9 innings.

marsta58 was in a talkative mood in the clubhouse, 'Great game! If only we could win all of the close ones - wouldn't that be nice! Since that's not going to happen, I think I'll savor this one for a little while.' 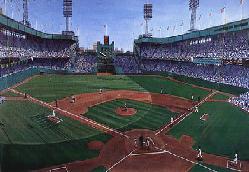