The Buzai Hu Too defeated the SOCAL WAVES by a score of 4 to 1 at Jack Murphy Stdm'78.

Buzai went ahead for good in the top of the 4th inning as they scored 2 runs on 1 base hits. The critical plate appearance was by Gabby Hartnett, who quieted the home crowd when he cleared the fences for a two-run home run (his 2nd of the season). Buzai managed only 6 hits on the afternoon.

Stan Coveleski(1-1) went 8 innings allowing 1 run for the victory. Ken Sanders earned his 2nd save. Luis Tiant(1-4) was charged with the loss. 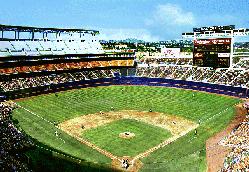