Cuckoo Christensen had 2 base hits at County Stadium '57 where the Montrose Kachinas beat the Brightwood Pioneers 2 to 1.

Dan Petry(5-11) pitched well for Montrose in their victory. He was reached for 3 hits and 5 walks in 6 and 2/3 innings. Brightwood had a chance to come back in the 9th but they came up short.

Jason Isringhausen was credited with his 20th save. Mickey Lolich(9-6) was charged with the loss. When questioned about the loss, Bill Kitt said, 'The fans got to see an exciting game out there this afternoon. Unfortunately, we couldn't get it done this time. Next time, though, we'll be the clubhouse with all the smiles.' 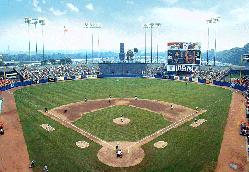