Al Rosen slammed a homerun and had 3 RBI as the Foghorn team defeated the Jersey Jocks by a score of 9 to 8 at Bennett Park '11.

Foghorn won the game with a rally in the top of the 8th inning with 2 runs utilizing 4 base hits. Gary Sheffield got things rolling when he smashed a solo-shot out of the park (his 33rd of the season). Rosen was next to the plate, but was promptly struck out. Willard Brown then drew a walk. Mule Suttles came up and he laced a base-hit. Rico Petrocelli stepped into the box and would hit into a force play scoring the final run of the inning. Jersey threatened in the 9th but their rally came up short.

Roger Clemens(12-7) was the winner allowing 7 runs in 7 innings. Jim Shaw gained credit for his 9th save. Lee Smith(4-3) suffered the loss in relief.

'Some losses are harder to take than others' Tim lamented after the game. 'This was one of them.' 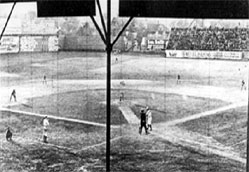