It was a wild day in Bank One Ballpark '05 where the Foghorn ballclub defeated the BS TIGERS VI by the score of 18 to 12.

Gary Sheffield was a thorn in the side of the hometown fans as he enjoyed a fine day at their team's expense. He belted a three-run homer (his 39th of the season) in the 1st inning, laced a single resulting in a run in the 5th inning and doubled in the 9th inning. Foghorn lit up the scoreboard in the 1st inning with 9 runs on 7 hits and the 5th inning when they had 4 runs on 5 hits. Foghorn totaled 16 hits on the afternoon. 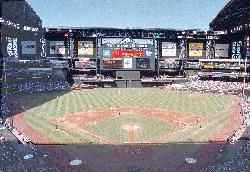 at Bank One Ballpark '05