Mike Clevinger came through with a solid 9 innings and Alex Bregman had 2 base hits as the Brooklyn Bums won a dandy at Dodger Stadium 2018 over the Jeep Tours, 3 to 2.

The deciding run was scored by Brooklyn in the bottom of the 9th. Wil Myers doubled. Two outs later Christian Yelich stepped up to the plate and he was walked intentionally. Yelich got a good lead and stole second. Bregman was up next and he laced a base-knock resulting in an exciting win for Brooklyn and a raucous post-game celebration by the home town fans. Brooklyn had 7 hits for the afternoon.

Clevinger(4-1) lasted until the end allowing 2 runs for the win. Scott Oberg(3-3) was hit with the loss in relief. Clevinger was obviously very pleased with his performance in the aftermath of the game, 'It was just one of those games where everything worked. My arm felt great, heck, I could have pitched another two or three innings. I only hope that I can do it again next time out!' 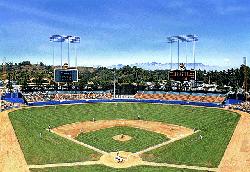