Wilson Ramos left the yard as the Brooklyn Bums topped the Jeep Tours by a score of 6 to 4 at Globe Life Park 2018.

Brooklyn scored 3 runs in the 7th inning. After an out was recorded, Alcides Escobar began the rally when he drew a walk. Christian Yelich stepped up next and he drew a walk. Alex Bregman then doubled resulting in a run. One out later, Ramos came to the plate and was walked intentionally to load the bases. Anthony Rizzo stepped into the box and doubled driving home another two teammates. Brooklyn had a total of 10 hits for the game.

The winning pitcher was Dallas Keuchel(9-15) who allowed 4 runs in 7 and 1/3 innings. Chad Green was credited with his 3rd save. Seranthony Dominguez(2-7) was tagged with the loss in relief. Brooklyn scored big getting 3 runs off him in 2 innings.

'It wasn't my best outing, but I'll take the win' Keuchel said. 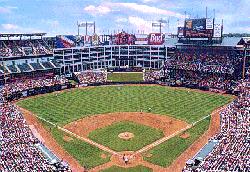