Wally Berger blasted 2 homeruns and had 5 RBI as the Las Vegas Bombing Reds rallied impressively to win in dramatic style over Strangeglove Doctors in 14 innings, 9 to 8.

Both teams were tied at 6 runs apiece after nine innings. Las Vegas came out on top in the 14th inning. Stan Musial led off and started the attack as he drew a walk. Berger came to the plate and blasted a two-run home run (his 15th of the season). Two outs later Edgar Renteria stepped in and he drew a walk. Renteria got a good lead and stole second. Jose Altuve stepped into the box and smacked a single, and an error was also committed, resulting in an exciting win for Las Vegas and a wild post-game celebration by the home town fans. This was the kind of game that many fans love as the lead changed hands 5 times. 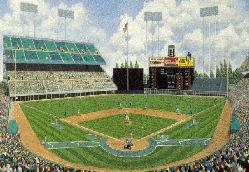