J.R. Richard was able to finish what he started and was credited with a complete game as the Strangeglove Doctors beat the Long Branch Whiskey by a score of 3 to 1.

Strangeglove had 2 runs cross the plate in the top of the 7th inning when they had 3 base hits. Carlos Delgado opened up the inning nicely when he lined a base-hit. Hank Aaron was next to the plate and he laced a one-base hit. Martin Dihigo then drew a walk to load the bases. Two outs later Bennie Tate stepped up to the plate and he delivered a base-hit scoring two baserunners. Both teams totaled 6 hits on the afternoon. 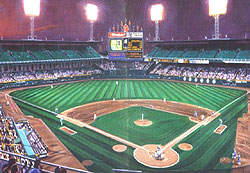