In an great finish the Kindergarten Allstars came back in the top of the ninth and held on to win over the Bluegrass Backups by a score of 7 to 6 at Crosley Field '41.

Kindergarten erupted with the game winning runs in the top of the 9th inning scoring 2 runs on 2 hits. Rafael Furcal kicked off the action when he stroked a one-base hit. Furcal got a great jump and stole second easily. After an out was recorded, Bob Elliott came up and he cleared the fences for a two-run home run (his 2nd of the season). Kindergarten rapped out 10 hits for the afternoon.

The win was credited to Ad Liska(1-0) who went 1 and 1/3 innings allowing no runs. Will McEnaney(0-2) took the loss in relief. dwg was all smiles after the game, 'To pull a game out in your last at bats, is a beautiful feeling - and did you see how quiet it got out there? You could have heard a pin drop when we took the lead. But, hey, that's what makes baseball so great - as the great sage Yogi Berra says, 'it's not over 'til its over.' 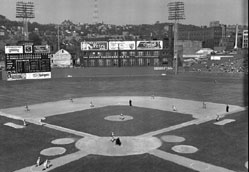