Renie Martin(4-4) and Claude Hendrix(6-5) treated the Livonia fans to a fine pitching duel at Angels Stadium '05. The Livonia Loggers eventually emerged as victors over the Junction Boys by the score of 2 to 0.

Livonia had 2 runs cross the plate in the 4th inning. Red Schoendienst started the inning off right when he singled. Lenny Dykstra came next and he reached on an error. Frank Thomas then lined a single knocking in a run. Thomas took second on the throw. Carlos Delgado was up next and he hit a deep fly scoring the final run of the inning. After the 4th inning, neither team was able to score.

Hoyt Wilhelm was credited with his 10th save. With this win, Livonia has a 26-38 record. They have been 7-3 lately. Not able to get much going in recent weeks, Junction is 2-8 of late and now has an overall record of 29-35. 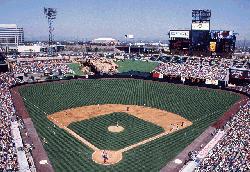