In a great finish the Antioch Switcharoos won in dramatic fashion over the Kensington Clowns by a score of 7 to 4 at Veterans Stadium 1999.

Antioch erupted with the game winning runs in the 9th inning when they scored 4 runs on 3 hits. The critical plate appearance was by Chipper Jones, who brought the crowd to their feet when he belted a three-run homer (his 43rd of the season). Antioch had a total of 8 hits for the game. 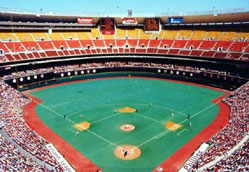